There are so many options when it comes to faucets. Hopefully, after reading this blog post you will have a better understanding of the differences between the various types of bathroom faucets.

Widespread
A widespread faucet has two separate handles or knobs; one on the left for hot water and the other on the right for cold. Positioned between the the two controls is the spout. The amount of room between the handles varies from around four to twenty inches apart. Widespread faucets require 3 separate holes in your sink or counter top.

Minispread
Minispread faucets are very similar to widespread faucets, except the controls and spout are positioned much closer together. This type of faucet is a good choice for a small sink because the knobs are set less that four inches apart from the middle spout.

Centerset
A centerset faucet has two levers and a spout in the center which are all positioned on a base. Some centerset faucets have a single lever which contain both hot and cold features.

Single Post
Single Post faucets are probably the least space consuming and the easiest to clean. These faucets only require one hole. These faucets can have one lever or two controlling water temperature, but are always contained on one unit.

Wall Mounted
A wall mounted faucet can be widespread or centerset, and can have one or two handles. These differ from all the aforementioned types of faucets because they are attached to the wall instead of sink or counter top. When purchasing a wall mounted faucet, be sure to pair it with a deep or large sized sink so water doesn't splash out.

Posted by Veronica at 6:29 PM No comments:

Before getting your hands dirty, you'll need to promise yourself that you'll spend more time relaxing – in the bathroom. Whether you plan on gutting the bathroom and starting from scratch or simply want a few changes, here are some tips on how to turn your current bathroom into a relaxing spa. You won’t want to get out of the tub! 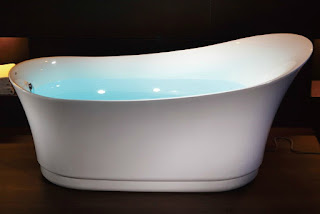 If you are having a problem with the pressure of your water it may be due to a number of reasons. I learned a few helpful tips from the book Home Wiring and Plumbing. In the book they target different types of problems and provide the solutions through step by step photos and guides. One chapter discusses a common problem: low water pressure. 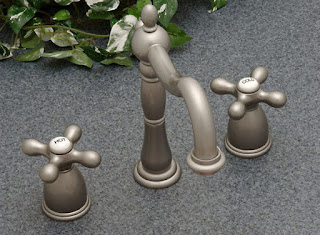 When it comes to your kitchen or bathroom sink faucet, you may want to begin by checking the small screens attached to the faucet. Minerals and rust often collect in these screens and can be cleaned with white vinegar or simply scrubbed with a toothbrush. Be sure to check your kitchen sink faucet sprayer as well because these also contain small screens.

If you are having difficulty with the water pressure in your dishwasher or washer, it may be because the water supply has to pass through shutoff valves before it can reach the appliance. To make sure your water pressure is optimal, be sure that all shutoff valves are fully open. Washing machines in particular are designed so that water is pulled through a filter. Be sure to clean the filters so your washing machine can fill quickly.

I also learned from the book that many old homes built before the 1960's are equipped with iron pipes. This means that your low water pressure problem may be due to mineral build-up within the pipes. A better alternative is copper or plastic.
Posted by Veronica at 4:15 PM No comments: